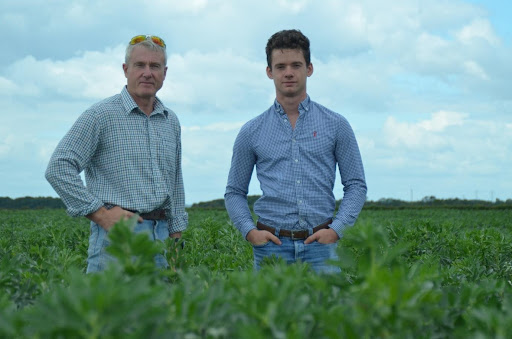 Strip seeding using Claydon’s Twin Tine set-up to reduce soil disturbance has delivered numerous advantages for Lincolnshire farmer Mick Stanley since he introduced it in 2012, the benefits being very apparent during the challenging 2019/20 season.

“The traditional way to farm on the Lincolnshire Fens was with crawler tractors, subsoilers, ploughs and combination drills. That was how things were done here for many years, but it was time-consuming, labour intensive, frustratingly slow, hard work and expensive – so no way would I go back to that way of working now,” Mick Stanley of M & G Farms at Helpringham near Sleaford emphasises.

Instead, since 2012, a Claydon Opti-Till® strip seeding system, based around a 4m Hybrid drill, has been used to establish crops. The drill is fitted with the company’s Twin Tine kit to reduce soil disturbance and has proved to be the best way to establish the farm’s 300 acres of combinable crops, plus another 400 acres for others in the area. After drilling thousands of acres with the Claydon Hybrid, Mick knows it inside out and what works best on the fen soils. For him, the Twin Tine kit delivers significant benefits.

“The Twin Tine kit is a useful option on heavier soils which tend to peel in wetter conditions,” confirms Jeff Claydon, who invented the Claydon Opti-Till® System of crop establishment. “The tines are positioned more vertically, so on some farms and in wet conditions this approach may be a better option than the standard A-Share, although those will cover most requirements.”

Mick’s first experience of the Claydon System came in autumn 2006 when, to try it on his own farm, he asked neighbouring farmer Tom Ireland to drill some oilseed rape with one of the original Claydon V-Drills, so named because its tines were in a V formation. Tom subsequently purchased one of the first 6m Claydon Hybrid drills and established all the combinable crops on M & G Farms’ 300 acres (122ha) while Mick was busy running his steel fabrication business.

“The family farm was originally 70 acres (28ha), so it was obvious that it could not support the entire family and that I would have to do something else,” Mick explains. “I had always enjoyed practical work like welding and started M & G Fabrications in 1988 to specialise in the design and construction of industrial buildings.

“We worked on sites throughout the UK and I was constantly away, so my time at home was limited and I wasn’t able to focus solely on the family farm, which was sold. Eventually, I ended up buying it back, along with another farm that had been rented, followed by other parcels of land, so the area grew to its current size.

“When Tom came here with the Claydon V-Drill I could see that it was much faster and more efficient than the conventional approach we had been using, but the traditional farmer in me kept looking for potential pitfalls. Initially I was concerned that it might lead to flooding of the seeded areas, poor rooting on our clay soils which retain water, and increased slug problems, but exactly the opposite proved to be the case.

“Drainage and rooting were significantly improved because the soil structure, health and worm populations were so much better, but it was not an overnight process. The benefits continue to compound even years later, so I would advise new adopters of the Claydon System to be patient and appreciate that good things take time.

“Having seen significant improvements in our oilseed rape crops and average yields rising to around two tons per acre my faith in the Claydon System grew to the point when, in 2010, I decided to purchase my own 4m Hybrid drill, 7.5m Straw Harrow, 9.5m rolls and 197hp Claas Axiom 820 tractor. I had no equipment left over from the old days, so getting back to the stage where I was farming myself represented a considerable investment.

“Changing from a conventional system based on crawler ploughing and combination drilling I wanted to know that the land was in the best possible condition to make the transition to strip seeding. I ran a Spaldings FlatLift subsoiler with low-disturbance legs and points through all of it just to set my mind at rest, but it probably was not necessary as the Claydon’s leading tine removed compaction in the top 150mm.

“Our old combine straw chopper was not so efficient as they are now and I found that two or three passes over the stubbles with the Claydon Straw Harrow massively improved the distribution of chopped straw and the effectiveness of slug control: you could see to the line where three passes were used compared with just one.

“Even though straw choppers have improved greatly, and the one on our 10.5m Claas Terra-Trac 600 combine is excellent, I still regard the Straw Harrow as an essential part of our crop establishment system. It does an excellent job of evening out the distribution of chopped straw and knocking it off the stubble onto the ground where the worms can get at it, then take it down into the soil.

“The Straw Harrow also creates a shallow tilth which encourages volunteers and weeds to germinate quickly. It also destroys slugs and their eggs, so numbers are now low and very few slug pellets are needed. Even though at the time it might not look like you are achieving anything significant it certainly does, and I find that rolling after the Straw Harrow improves blackgrass germination.

“In my experience, the Straw Harrow should have a role in any type of farming system. In the past, we even used it to rake in wheat and beans which were drilled into difficult seedbeds, although that has not been necessary since changing to the Twin Tine set-up.

“Mechanically, the Claydon drill is bulletproof and does a wonderful job, but our fen soils have a high clay content and I have found that the Twin Tine set-up is the better, more versatile option.

“Initially I used the standard one-piece leading tine and 7″-wide A-Shares but found that they could bring up slivers of wet clay in exceptionally wet conditions, as we had in 2012. Tom and I visited the Claydon factory to look at what was then a relatively new development and came away thinking that it would be a better option, although on this land you need a row of following tines and batter boards behind them to ensure a level finish.

“The Twin Tine set-up was initially fitted in 2012 after a prolonged spell of wet weather made our heavy clay-based soils even more difficult to manage than normal. The intention was to return to the standard set-up when the land dried out, but the Twin Tine system was so effective and versatile that it has been used continuously ever since. Evidence of that is that a new set of A-shares purchased six years ago remains unused.

“The land here is extremely difficult to farm well and even now I am still learning because every season is different. The 2019/20 season is a case in point, the first that I can remember when no winter wheat could be grown anywhere on Helpringham Fen.

“The extremely wet weather gave way to extremely dry conditions and from 1 March to the end of May we had just 1.35” (35mm) of rain. In mid-April, a neighbour asked me to drill 180 acres of spring beans as his own drill, and one brought over by a neighbour, would not penetrate because the soil had baked like concrete. The Claydon Hybrid did the job without any problems at all, but the fact that it needed every one of our Claas Axiom 850’s 264hp (197kW) reflected just how tough conditions were.

“Recently, we took on some land that had been into long-term grass and as my son, Ben, had never done any ploughing I thought it would provide a good opportunity to turn the soil over before we drilled it with the Claydon. That was a real eye-opener! Over the years I had forgotten the huge amount of time that ploughing and following cultivations take, the vast amount of fuel these operations burn and how they destroy soil structure.

“It was a good reminder of how easy the Claydon System is to use and the wide range of benefits it provides.  It increases your awareness of soil health and improves its condition by increasing biomass levels. Over the years the structure of our heavy clay land has improved significantly, helped by our use of bio-solids and the huge increase in worm activity. It now drains much more quickly after heavy rain, the surface remains level and is much more supportive, so even running machinery on the land after heavy rain has little impact.

“Wherever possible we use the tramlines, but very occasionally if I feel that we have damaged the soils on headland areas with grain trailers during wet harvests I might run a FlatLift subsoiler fitted with narrow legs and small wings through certain areas at 10” to 12” deep.

“Since introducing the Claydon System our average yields have definitely increased. Most of the winter wheats are milling varieties that average over 4t/a (9.88t/ha), and we have had up to 5t/a (12.35t/ha). Oilseed rape has always averaged around 2 t/a (5t/ha), but agronomically and financially it has become much riskier to grow.

“The Claydon System has transformed the way that I farm and helped to ensure the financial sustainability of the operation for my son Ben.” 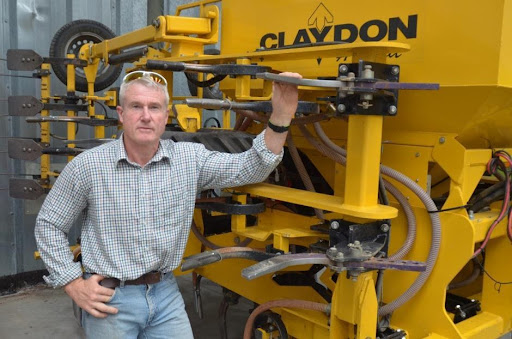 Mick Stanley prefers the Twin Tine set-up on his Claydon Hybrid drill and has used it since 2012.

The Claydon System transformed the way that Mick Stanley farms and helped to ensure the financial sustainability of the operation for Ben. Father and son are seen here assessing the prospects for a crop of spring beans at Helpringham Fen in early July 2020. 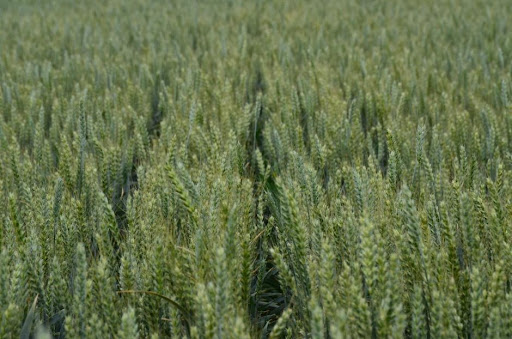 The Claydon Twin Tine set-up produces uniform crops, such as this spring wheat on Helpringham Fen. 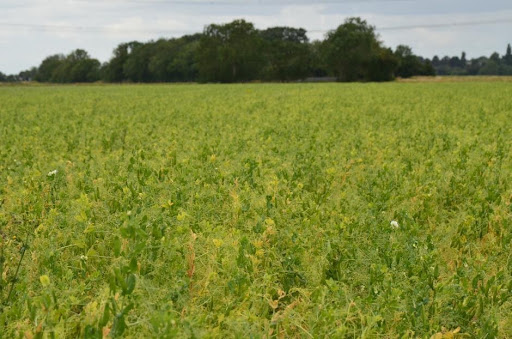 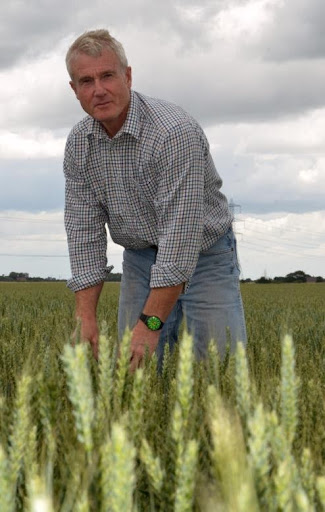 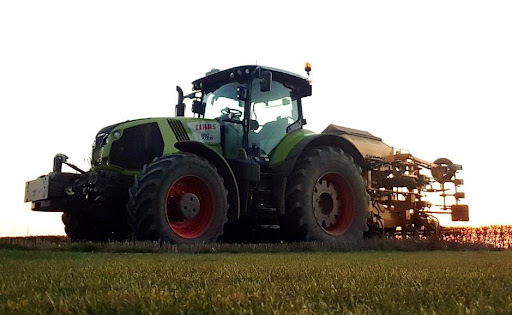 Preparing to drill with the 4m Claydon Hybrid.

Thank you for reading our blog. If you have any questions or want to know more about the equipment mentioned in our blog, head over to Claydon Drills today or get in touch.