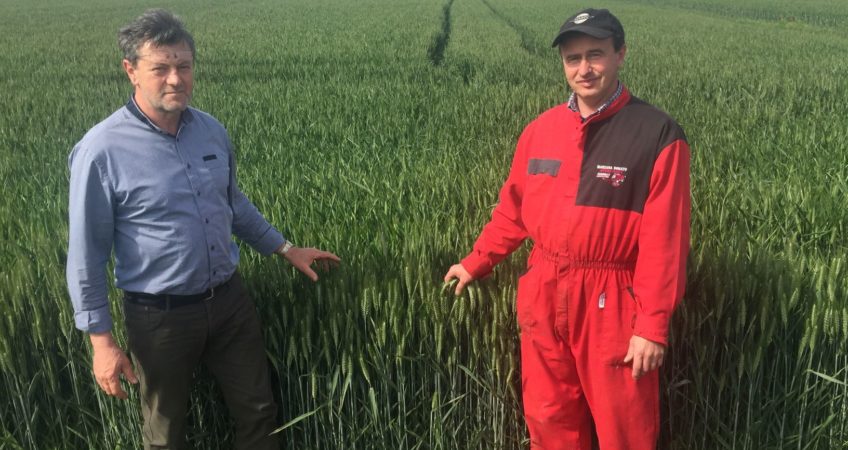 Since 2002, when he designed the patented leading tine drill, Jeff Claydon became aware of the importance of looking after the soil where he farmed.  He saw the damage which unnecessary cultivations can cause in terms of compaction, erosion and flooding.  In the years that followed, he witnessed the benefits of Claydon Opti-Till® to his farming business: increased worm populations, healthier soil, reduced costs and improved yields.

So what news from those Claydon customers who have already begun harvesting across Europe?

Early yield indications are very good compared with neighbouring farms. In many areas, those who have cultivated have dried out their soils at a time when rainfall has been very low for the second season running, resulting in lower yields.

In north east Bulgaria, for example, a customer who has been running three 8m trailed Claydon Hybrid drills for the last three years, has achieved 9.4 t/ha winter barley yield. He has seen similar benefits to his soil as other Claydon drill users which is following through into higher yields than neighbours running conventional systems.

The north east of France has experienced two very dry seasons in the past two years.  Claydon customers in this area who establish crops with a 6m Hybrid T6 trailed drill have started harvesting barley; their yields are 10.4 t/ha compared to the area average of 9 t/ha.  The customer comments: “We have noticed that our soils have become more alive and friable and are easier working.”

To the north of Paris,  Christian Fourdraine has also started harvesting his barley.  Average yields for the area are approximately 8 t/ha, whilst Christian’s first barley yields are 8.9 t/ha.  Christian has been direct drilling for many years, but has seen most benefit since adopting the Claydon Opti-Till® system,  with a 3m Hybrid drill and 7.5m Straw Harrow in 2015.

In contrast, northern Italy has experienced unusually high rainfall throughout the spring. The Claydon-drilled winter wheat crop has performed exceptionally well.  Mr Borrini, who farms near the river Po, seeded winter wheat directly into soya bean stubble with one pass of his 3m mounted Hybrid drill.  His yields reached over 8.2 t/ha.  The region’s average is between 7-7.5 t/ha.

Claydon Opti-Till® looks after your soils, no matter where you farm, with great results and with reduced establishment costs.