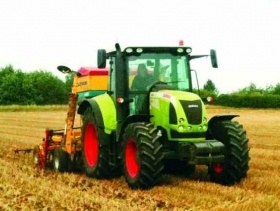 Posted by Spencer Claydon In Your Farm News 0 comment

Richard Long, who farms 240ha at Peasenhall, near Framlingham, runs a Väderstad Rapid for establishing most of his cereal acreage but has used Agrivice to establish all of his 44ha of oilseed rape for the past five seasons, as well as about one-third of his cereal area.

“Although we perhaps achieved fractionally higher yields under our previous establishment system, our costs were a good bit more,” he says. “In addition, direct drilling a proportion of our crops using a contractor also makes sense for other reasons –– mainly because we only have a certain amount of labour available. “When all three of us are busy with the harvest, we aren’t able to focus on establishing rape as well.” Direct drilling OSR into cleared stubble keeps the moisture loss on his clay soils to a minimum –– and the seedbed is less favourable for slugs, says Richard Long.

“At around £50/ha –– including slug pellets –– it’s helped us lower our rape establishment costs considerably and has meant we can concentrate on cutting wheat while the contractor gets the rape in at the optimum time. “ Direct sowing proved to be particularly valuable this season –– with a severe lack of autumn rainfall meaning any soil moisture present was “even more precious than usual,” he continues. “The wider row spacing seems to have little effect on our yields in either rape or wheat –– they’re more or less comparable with what we were getting from our previous plough-based system.

” While he concedes that, unlike some users of the technique, he isn’t 100% convinced he would want to establish all of his crops by direct drilling, Richard Long reckons on “particular soils in certain conditions,” the system can be the most effective way of establishing second wheat. “Some of our wettest land can be very= difficult to manage if it’s cultivated too much. In this situation, we tend to use a Väderstad Carrier working at about 1.5in (4cm) deep to create a small amount of tilth, then we direct drill wheat into that. “But for oilseed rape, it’s a case of going straight in with the drill –– even if the previous straw has been chopped, rather than being baled.” Slugs can be a problem regardless of the system and aren’t any more of a pest in direct drilled crops, than under a plough or min-till system, he says. “Our graminicide costs are broadly similar now but we’re making fewer passes in the field –– and using less diesel and wearing less metal –– and that accounts for our main cost-savings.” Headlands are usually sub-soiled first to alleviate compaction where tractors and trailers have been running during harvest but the main body of the field is left untouched unless serious problems are evident.

“In a dry autumn following a wet summer –– as was the case last year –– the opportunity is taken to give the soil a thorough loosening prior to drilling without the risk of doing further damage.” The tight OSR rotation has perhaps limited the potential of his crops in recent years, he concedes. “But this season’s Astrid, Cabernet and Castille look comparable with subsoiler-sown ones in the area. Given our lower establishment costs, I’m happy with our yields of around 3.5t/ha.”